In this article, we look at how to avoid becoming a desperate business owner, with the help of Shannon Susko. Shannon is the author of the book The Metronome Effect, which is based around her real-life experiences as a successful entrepreneur.

What is a Metronome Effect

Shannon Susko is the author of Metronome Effect, a book which provides entrepreneurs with a framework for scaling their businesses. Shannon is also the founder of 3hag, a company that helps businesses grow through operational excellence. In this article, we’ll explore Shannon’s work and how the Metronome Effect can be used to scale a business.

The Metronome Effect is based on the principle that businesses need to operate like a metronome in order to scale effectively. That is, they need to have a consistent beat or rhythm that they can follow as they grow. This consistent beat enables businesses to track their progress and make necessary adjustments along the way.

Shannon has developed a three-part framework for implementing the Metronome Effect in businesses. This framework consists of setting the right tempo, maintaining consistency, and making adjustments.

As your business grows, you’ll need to make adjustments to your tempo and systems. Shannon recommends using a tool like the 3hag Retrospective Canvas to help you identify areas where you can make improvements.

Implementing the Metronome Effect can help you scale your business effectively. By setting the right tempo, maintaining consistency, and making adjustments along the way, you can ensure that your business is always moving forward.

Metronome Effect How it Works

“I built two Fintech companies; the first we started before Fintech was even really a thing,” Shannon jokes. “When we started up in 1995, we were very keen. We were young, there were four of us and we really did just want to knock it out of the park – and we honestly thought, ‘no problem’.” However, Shannon and her team soon found that in practice, it just wasn’t that simple. “When we started the payment company, we pivoted three times,” Shannon admits. “You can imagine that in pivoting three times, we had no idea what we were doing; it was chaotic.”

Rather than look back on that turbulent time with disdain, however, Shannon has turned it into something positive. “I wouldn’t trade that time in for anything because of how much it taught me,” she explains. “I don’t, however, want another entrepreneur to have to go through what we did, which is why I wrote The Metronome Effect. I was just so desperate to grow the company and I don’t want anyone to be as desperate as I was.”

Shannon’s first company was ultimately a success, even if it took a little longer to get there than expected.

“When you’re first starting out, you’re ‘swinging for the fence’. We were hungry for that big exit, but with our first company getting there took us ten years,” Shannon recalls. “We hit many inflectionpoints from 1995 to 2005; it was a rollercoaster, but it was a good exit in the end.”

With experience on their side, their second company had a much smoother ride.

“We really did hit it out of the park,” Shannon says, matterof fact. “Out of the park for most people means that they have the liquidity to do what they want in life. With our second company, we went from zero to three years and out.”

To help them to achieve growth at this rate, they drew upon the knowledge and experience of some the best thought leaders in the world.

Shannon believes that it was the framework they designed whilst building company number one, that allowed them to achieve such expedient growth in company number two.

“The second time, we were really able to show that if you start with the system – a growth framework – and really understand the pieces you need to put together, you can grow so much faster.”

Most people go into business with this big ‘romance’. They think, ‘I’m going to grow this big company’, like an Apple or a Facebook, but the reality is, most entrepreneurs don’t come anywhere close.

There sometimes comes a point where a business owner just can’t do anymore. They hit a brick wall and rather than continue in growth mode, they find themselves in photocopy mode; they end up doing the same stupid s**t over and over again, hoping that time, by itself, will help them to grow their business.

“I definitely learned that the hard way,” Shannon agrees. “When I think of our first four years of business, we were very romantic about the whole thing. We were in the internet bubble years and everybody was coming in with a nice idea, raising a lot of money and then selling it for a huge valuation – without executing anything.”

Shannon believes it was having to push beyond those internet bubble years, that really challenged them as a company to up their game.

“When the ‘romance’ goes away or the bubble bursts, one of the things you have to lay down clearly if you want to continue to growis your tenure; what are your one-yeargoals, your three-year goals etc.”

Believe it or not, most companies don’t even have a one-yeargoal; it’s madness. It’s as if they’re just blindly going from one day to the next with no sense of direction whatsoever.

“When I’m working with companies and coaching my framework, I’m always very respectful for how well they execute day to day, month to month – but I do tell them if they’re just driving around the block. You don’t get in a car and drive with no purpose; you’re always going somewhere, so treat your business the same. Get on the road knowing what the next stop is. Sure, you might need to stop for supplies and gas, but then it’s on to the next stop and so on.”

However, not everyone is receptive to the idea of long-term plans.

“Sometimes I get pushbacks. If I ask, ‘where do you want to be in ten years?’ A lot of people say ‘I don’t even want to be here in ten years’. That’s fair enough, however with my companies, even though it took me ten years to sell one and three years to sell the other, we always had a ten-yeargoal in place; that’s what created the value of the organisation to others looking in on it. What made the ten-yeargoal really believable, however, was also having a three year highly achievable goal.”

This is what Shannon refers to as the ‘Three Hack’.

“I love the Three-Hack. When we were building our companies, as the owner/entrepreneur, I had already told people where I believed we were going to go. However, if I couldn’t figure out how to get us there and be confident in my prediction, the value would be gone.”

“It’s overwhelming for them,” Shannon agrees. “I was speaking with 140 CEOs last week and I asked a question: Who has a ten to thirty-yeargoal? They all laughed; I think there were only a few people who actually raised their hands. When I then asked who was confident in their strategy, those few raised hands went straight down.”

Shannon believes that the attendees were not confident in their strategy, because they hadn’t adequately mapped out how to get to where they wanted to be. It’s in doing this, that The Metronome Effect comes in.

The thing I like about Shannon’s book and framework is that it is written for the everyday business owner; it’s very ‘real’ in the way that it’s written.

“It comes from where everybody is living and it’s written in a way that if you’re stuck in one particular area, you can flip it open and go straight there. I also use a lot of pictures as 88% of the population learn best that way,” Shannon adds. “It’s so simple and there’s an audio version as well (with reference to images of the systems on the website) because not everybody likes to read books.”

In trying to learn everything that is contained within The Metronome Effect, Shannon read four books a week for two years.

“This book is one of my give-backs,” Shannon states. “We reference all of the thought leaders that we used. We picked the best theory, which we thought could be put to practical use. I make it really easy for someone to pick up the book, find what they need and make it actionable.”

For more information, head on over to www.shannonsusko.com.

If what has been covered today has resonated with you and you’d like more information, feel free to contact me.

“Remember, failing to learn is learning to fail.” 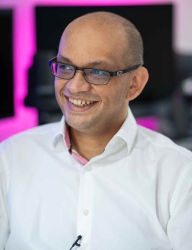 Follow me
Peter Boolkah
Business Coach at The Transition Guy
Hi, I’m Peter Boolkah, business coach, blogger, speaker, and podcast host. Since 2005 I have been coaching businesses across the globe, ranging from solo entrepreneurs to executive management teams at large organisations. My clients choose to work with me because of my proven, no-nonsense approach to scaling businesses.Through getting great results with my clients I was inducted into the coaching Hall of Fame in 2013. If you are interested in coaching with me, or just passionate about business and want to chat you can book a call with me on my website or connect with me on my relevant social media channels.

Follow me
Latest posts by Peter Boolkah (see all)

Take
your business
to the next level